Have you ever heard of Sebo and Miele brands? These two are highly rated German companies. And, their models have great reputation for high quality and value. Sebo models are made using high-grade ABS plastic and feature S-class hospital grade filtration. Whereas, Miele focuses on developing 6-speed suction control with powerful two-motor systems. And, it is not a doubtful statement when I say that Germany manufactures the most top-notch machines in the world. However, the big question that most people ask when it comes to vacuum cleaners from Sebo and Miele is which is better. Today, I will come up with 2 representatives from each company and see which model is more appealing.

If you are looking for a new technology which gives strong suction power with reasonable price, then you definitely should continue reading the information below. And, if you want more choices, here are other articles: Sebo X4 vs X5, Sebo Vs Miele

Upright vacuums have always been the most reliable and classic design of vacuum cleaner even though the design has been around quite some time and there are many more types of cleaner available in the market nowadays. Among those upright models, sebo x4 vs miele s7 remain two of the most popular with their ability to make your house dust-free. The fact that they are from reputable brands makes them more reliable. These models compare quite well versus one another when it comes to friendly features and overall performance. Yet, this doesn’t mean they are identical. There is an assortment of aspects which distinguish the Sebo x4 from Miele s7 and vice versa. If you are facing a dilemma between these two models, keep reading the sections below. I hope it will help you figure out the best machine for your home. 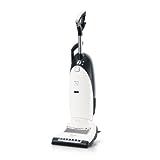 Sebo x4 vs Miele s7 come from different brands, so you will have totally different models in terms of appearance. Sebo x4 is an upright vacuum and it has an older classic design which gives the vintage vibe for the item itself. It has square design with low profile. This will be beneficial when you try to get a reach under furniture. It is available in three colors, including red, dark blue and white. Somehow, it find this one is a little cheap. On the other hand, the Miele s7 look pretty and sophisticated with its overall design as well as kind of look pleasant to the eye. It is made using durable plastic but it not flimsy at all. It has a shiny glossy finish making it even more stylish and modern. What’s more impressive, both models come with extra-long power cord, 40ft (Sebo x4) and 39ft (Miele s7). With that length, you can go anywhere in the room without having to change the outlets.

Both models are easy to maneuver. Especially, Sebo and Miele attached 2 wheels at the back so that Sebo x4 vs Miele s7 can move freely across the room. In addition, the Sebo x4 with slimmer design comes with lighter weight, just 16 pounds, as compared to the Miele s7 with 21 pounds. Also, both of them have extremely long power cord and hose for great maneuverability. Many high-end products can even have this length of power cord. And, those who used to own a short power cord will understand the inconvenience of movement when you have to change many times in order to reach every corners.

Don’t be tricked by their appearances. Sebo x4 vs Miele s7 are highly rated in very review. Especially, the Sebo x4 is an improved and updated version which has the lowest vacuum cleaner repair rate of any vacuum I have ever seen. And, the Miele is a matching rival of Sebo x4 in terms of quality. If I have already triggered your interest, then keep on reading to know what features make them stand-out from the rest.

Both Sebo x4 and Miele s7 comes with affordable prices.

The Sebo x4 is rated 3.8 stars. The machine was easy to use yet powerful to lift away all the dirt and dust. The multiple layer filtration system was another plus point. Yet, in some’s opinion, the standard hose was a bit short.

The Miele s7 receives 3.8 out of 5 stars on Amazon. People loved those user-friendly features like swivel head and LED lights. Also, the machine was extremely quiet, yet generated great suction power. However, it was little heavy.

In conclusion, both Sebo x4 vs Miele s7 are worth a try. They come from reliable brands plus the technical parameters are appealing. Although there are a few differences, both of them are equivalent in terms of quality.

Which one is your favorite?

Top 5 Best Vacuum For All Floors

Does Roomba Work On Thick Carpets

It is important to also note that easyhomevacuum.com is a participant in the Amazon Services LLC Associates Program, an affiliate advertising program designed to provide a means for sites to earn advertising fees by advertising and linking to amazon.com. Amazon, the Amazon logo, AmazonSupply, and the AmazonSupply logo are trademarks of Amazon.com, Inc. or its affiliates.