In this technology age, machines has played an essential role in human life. Admit it. Out life has become much easier and more convenient with the assistance of technology. And, I believe one of the biggest advents of human being, in general, is vacuum cleaners. People nowadays are busy earning money, taking care of their children physically and spiritually, and dealing with other social relationships. Imagine after a tiring day at work, you go home but the house is messy with dust, dirt and pet hair. However, you are too exhausted to grab a broom. Here is where vacuum cleaner come in handy. All you need to do is plugging the cord into a socket and turn it on. They will do the clean-ups for you in a less-energy and less-time-consuming way. Some vacuum cleaners can pull up the dirt embedded deep into carpets. Especially, all vacuum cleaners are designed to use a filtration system which clears out allergens and small particles and makes your surrounding air clean and fresh.

In the last article, I made a comparison between Sebo x4 vs Miele s7. It is a difficult task to choose between two appealing models from different brands. Yet, the difficulty will increase when it comes to making decision between 2 machines from your favorite brand. If you a fan of Sebo and are looking for a reliable upright vacuum, these two are definitely for you. Sebo has already established a solid position in the market. This German brand has reputation for quality products at reasonable prices.

Sebo x4 vs x5 are ideal for those who have problems with asthmas, allergies or care about their family’s health. These two come with some great features and an intelligent build. They are great vacuums for various types of surface. Both models are literately two of the best solutions for cleaning carpet of all heights and styles. And, of course, the x5 is the newer version, so you can expect some improvements and additions as compared to the x4. 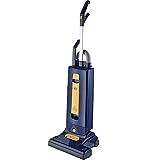 These models are extremely identical. And, if you don’t pay attention, you can get confused which one is Sebo x4 vs x5. While the x4 comes with 2 versions: red and black, the x5 is also available in blue and white/gray. The x5 will prove you how it is updated version of the x4 by showing a 3-inch wider cleaning path. This means the x4 comes with 12” cleaning path and the x5 has larger one with 15”. The larger cleaning path is, the larger area you can clean in one go. Thus, you don’t have to make many passes while cleaning with the Sebo x5. Another difference in design of these two models is the x5 comes with two-sided edge cleaning while the other only has one-sided edge cleaning.

Even though Sebo x4 vs x5 look tidy and slim, they are a bit heavy, especially the x5. While x4 weighs only 16 pounds, the x5 is up to 22 pounds in weight. It is understandable that they are powerful and designed with several user-friendly features. However, don’t worry. Sebo acknowledged that so it attached 2 wheels at the back for each one. Thanks to the wheels, those machine glide more smoothly on floors and across the carpets. Many customers feel blessed if a vacuum cleaner comes with 25ft power cord. How about 40ft cord? Both these models are designed with 40ft cord which saves time by reducing the number of electrical outlet changes. Also, with a low 5 and ½ inch profile, the body can totally lay flat for you to reach the areas under sofas or tables.

It’s time to look at what Sebo offers us with these models in X series. We have already known that the x5 is an upgraded version of x4, which is proved in the design section. How about their performance? Let’s see what differences and similarities are between Sebo x4 vs x5.

The Sebo x5 comes with a dust brush, an upholstery tool, a crevice tool, an extendable instant-use hose and wand.

Obviously, the x5 costs a bit more as compared to the x4.

The Sebo x4 is rated 3.8 stars. The machine was easy to use yet powerful to lift away all the dirt and dust. The multiple layer filtration system was another plus point. Yet, in some’s opinion, the standard hose was a bit short.

The Sebo x5 receives 4.1 out of 5 stars on Amazon. It offered great suction to pick up everything. Also, people loved it when it comes to long power cord and a quiet machine. However, the machine is heavy to some customers.

In conclusion, Sebo x4 and x5 both come with great capability and are equally strong. Every part is made in German. Nevertheless, if you want a more improved and updated model, you have to pay a little more to get the Sebo x5.

Which one is your favorite?

Does Roomba Work On Thick Carpets

It is important to also note that easyhomevacuum.com is a participant in the Amazon Services LLC Associates Program, an affiliate advertising program designed to provide a means for sites to earn advertising fees by advertising and linking to amazon.com. Amazon, the Amazon logo, AmazonSupply, and the AmazonSupply logo are trademarks of Amazon.com, Inc. or its affiliates.